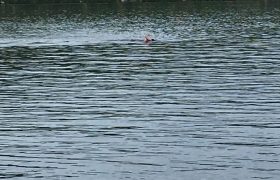 As it usually goes with me, I’ve lost track of blogging here recently, so I’m writing after the fact.  The good news is that I’ve been racking up the training entries so I have a lot to catch up on.  I’ve kept it going.

Before the weather got warm enough to swim outside, I had been training in an Endless Pool at my parents’ house.  It’s great for convenience (if you’re near it) but I knew it would be a different thing to try to swim any distance in open water, like I will be doing in an actual triathlon.

I’ve swum in lakes my entire life, but never for exercise before now, so this was a first.  I was pretty sure I could do it, though, because by this point I’d swum enough times in the pool that I knew I could swim for at least 15 minutes without stopping.  Judging from past finish times of the triathlons I’m signed up for, that should be more than enough time to cover the requisite distance.

So I fired up Google Maps and had a look at the lake where we were camping.  As it turned out, our site was directly across from a beach, and the distance appeared to be about 500m, give or take – the distance of the swim leg in my first upcoming sprint triathlon.  It was perfect.

I had my wife drive me around the lake to the beach, told her where the binoculars were and to watch for me waving my arms in case I got in trouble, and walked down to the edge of the water.

It was evening, so the sun was low on the horizon.  That turned out to be a very good thing, because the

I was using were tinted.  I had never really noticed it before, because I had only been swimming in a well-lit pool.  But they were very dark.  So dark, in fact, that I couldn’t see the shoreline at all, particularly also because they fogged up like crazy.  They also have curved lenses, which means they are somewhat blurry in water even if they aren’t fogged up.  Really, the only redeeming factor about them is that they have a great head strap.  They seemed great in the pool, but in open water it was suddenly a different story.  All of that quickly became a problem, because I couldn’t see the campsite I was headed for and had no idea where I was going.

To compound matters, after I got a ways out into the lake, I found myself noticing how dark the water was below me, and feeling the immense depth and cold of the expanse I was swimming over.  I started to get panicky and anxious.  It was made worse by not being able to see anything.

I took a break and floated on my back for a while, catching my breath and trying to calm down.  After some moments of thought I realized that the sun was bright enough to see through my goggles, so if I lifted them temporarily to figure out where it was on the horizon relative to the campsite, I could use that as a sort of compass bearing, keeping it just off my right shoulder.  This kept me headed in approximately the right direction without having to actually see anything clearly. I started closing my eyes when my face was in the water, to avoid seeing the enormous darkness below me, and after that I was okay.  I crawled on.

After about fifteen minutes I smelled wood smoke, and eventually saw my family sitting on a rock, waiting for me.  I had made it, but had definitely learned a few things.

One of the first things I did after that swim was order new goggles.  This time I got the Speedo Vanquisher 2.0 Swim Goggle, which has proved to be enormously better.  They are clear, have flat lenses and don’t fog up. They just work.

I also won’t be crossing any lakes anytime soon without a kayak escort. Luckily triathlons are always supported and along shorelines, so this particular situation shouldn’t arise again.